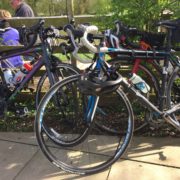 Week 13 can be summed up quite quickly as ‘it’s all about the bike’.

Monday morning started with a 3.5 mile Running Buddy session with a Personal Training client. This was the furthest he had run so far, but my left leg was still sore, now more around the ankle joint, which was worrying as this was a newer niggle.

Tuesday’s only run was the evening club run in order to protect my leg. I ran for 3 miles before the club run started and my leg was sore with virtually every step. This time it was my left foot and around the ankle. This was worrying as in the back on my mind I had always worried about the possibility of a stress fracture, but this had been ruled out due to my other symptoms.

Going against what I would tell any other runner in my situation, I went out with the club and for the first 3 miles my soreness moved from my foot to my calf. At this point there was less of an issue when my foot landed and the pace of the run increased and in turn, my leg felt less sore. We were only running between 6.50-7.00 pace, but this felt far better than anything around 7.30 pace. I ended up running 10.2 miles for the night, but I have to say I was not enjoying running at this moment.

Wednesday was a planned running rest day and I decided that I was going to give my legs a few days off of running and cycle instead. I went out on a route that I often use when cycling as it is a 15 mile loop that isn’t too busy with cars. Due to my going out at lunchtime and not wanting to cycle through South Wigston at this time of the day I lengthened it slightly to 16.55 miles. I managed to average 19mph for the ride which I was pleased with as half was into a headwind.

Thursday was a similar day. I went for a walk with my wife in the morning but realised that I wasn’t doing my leg any good so returned home, totalling 1.3 miles. Later in the day I went out for another bike with Steve from Wigston Phoenix to do the same loop. Adding on a little extra we did 17.5 miles in just over an hour.

Friday was a third non-running day and another venture out on my bike. This time I headed around Saddington, Gumley and Smeeton Westerby to do some hill training. Some of the hills were really hard work, with my heart rate getting as high as it would in the final print of a running race. I ended up completing 17.5 miles in just less than an hour and my legs knew about it.

Saturday morning was a quick ride down the A50 from Wigston to Husbands Bosworth and back; 10 miles in each direction. The first 10 miles were into a headwind and my legs were feeling the hills from the day before. It took my 37 minutes to do the first 10 miles and then, with the wind behind me, returned in 28 minutes. My legs were tired after this ride, but it felt good to have tired legs again instead of sore legs!

Sunday was my final planned non-running day before testing my leg again on Monday. A group from Wigston Phoenix Running Club had arranged for a 35 mile ride out to Foxton and back and so that would be perfect for me to get some more miles into my legs, but at a more sensible pace then I ride when alone.

I cycled to Aylestone Junior parkrun to marshal and then back to Wigston to meet the rest of the group. We then headed off out towards Foxton via Wistow, Kibworth, Smeeton Westerby and Gumley, with a few hills thrown in for fun! After breaking at Foxton Locks with a bacon sandwich and a coffee (cyclists seem to stop far more than runners do) it was back via a longer route, taking in Lubenham, Mowsley, Saddington, Arnesby, Willoughby Waterleys and Countesthorpe. Almost 40 miles in the bag when coming into South Wigston my front wheel punctured on an object in the road! Steve and Michaela stopped to help and after a quick inner tube change it was a mad dash home as I was now running late for Sunday lunch with my parents! A total of 42.7 miles cycled and with no niggles or soreness from the cycling, my legs felt nicely tired.

Looking back on the week I’m not now really sure where I am in terms of London Marathon fitness. They say you don’t lose fitness in a week, but you can lose confidence. However, I need to spend time looking back over my previous 12 weeks, plus the base training I did before Christmas, to give the real picture as to where my fitness currently lies and what I can aim to achieve at London.

As you may have noticed with the ending each week, the mind of a runner goes up and down frequently, depending on how the week went. It is rare that we keep in mind the whole block of training that we do and maybe we should do that more. It would make us less mentally fragile when things do no go to plan!

Week 13 Totals: 17.3 miles covered over 3 runs, 114.4 miles of cycling, plus 1 strength session and loads of stretching, rolling and sitting on hockey balls.